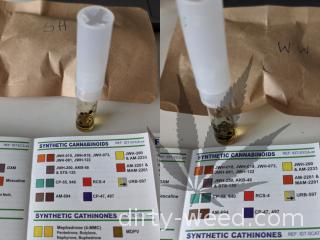 Kommentar: Hey, stoners of Berlin. I had some nasty side effects from two different kinds of weed I got from telegram. Weird smell, then sickness, sweats and headache with the first. The other type hit so strong I had to take a nap for a few hours. I am smoking for a long time and know strong weed but this was not it. I got tests and both showed positive for artificial canaboids. Photos attached for proof. The "strains" were called "white widow" and "strawberry haze". Group in question is @BlueDreamStore1, promoting themselves in different drug groups. I think they are fully aware of what they are selling because after confronting them with the tests they soon switched from "you had a bad day, we only sell high quality imported strains and all our customers are happy" to ignoring messages and deleting chats. I tested two other "strains" from friends who buy from other telegram stores and they tested positive for different artificial cannabinoids. I'll write warnings for those too. Really sad, stay safe kids.